This is part of a series of blogs on “All Things Kubernetes”. Each blog post will focus on highlighting the common issues that people encounter with Kubernetes and how they can overcome these issues. This blog was originally posted on Medium on September 14, 2019

Applications require access to sensitive information such as passwords, private keys and tokens to operate.

Kubernetes provides a built in resource called “Secret” that is intended for storing a small amount of sensitive data. Storing sensitive data in a Secret object allows for more control over how it is used and reduces the risk of accidental exposure.

Once a Secret object has been created, Kubernetes makes it really easy for pods to access the secrets without requiring any special code or customization. A Kubernetes secret can be consumed by a pod in two primary ways:

Some containers will expect to receive this information as environment variables. For example, a database access username and password.

Approach 2: Files in a Volume

Some containers will expect to receive this information as files in an in-memory volume mounted on the pod’s containers. For example, a certificate and associated private key. Kubernetes creates a file per key, meaning the application has to read all the files during startup.

Note that from a security PoV, it is extremely risky to configure secrets using YAML and store these in a Git repository. These files will be accessible to unauthorized users resulting in unnecessary exposure and potential compromise.

Kubernetes automatically implements several built in security controls that provide a baseline level of security for Secrets. Some of them are listed below.

Although these controls are important, they are by no means sufficient for production grade deployments.

When it comes to Kubernetes Secrets, it is critical to focus on the system where data is stored and accessed. Kubernetes secrets are stored in the cluster’s etcd database. Etcd is a highly available, distributed and consistent key-value store used by Kubernetes to store data. The use of etcd ensures high availability. But, it also has to be substantially hardened because it is now a prime target for attackers.

Harden the system by ensuring the following:

Harden the system by ensuring that etcd is configured to require mutually authenticated TLS for access by clients. In multi-master Kubernetes cluster deployments, the etcd servers listen on all interfaces. Therefore, limiting who/what can access etcd is a critical security control.

Harden the system by ensuring the following:

In a HA cluster configuration, harden the system by ensuring that mutually authenticated TLS is required for all etcd “peer-to-peer” communication. 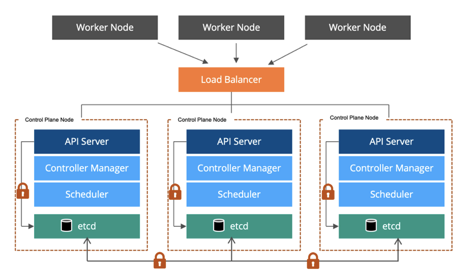 Ideally do not expose your API Server on the Internet. Enable “kubectl” access only to select, highly privileged administrators.

Configure firewall rules to block all inbound control connections to your VPC / Datacenter. In an upcoming blog, I will describe and showcase how you can implement this quickly to protect yourself against external threats.

Kubernetes is an extremely flexible and powerful framework that helps automate the deployment, scaling, and management of modern containerized applications.

Prioritize the “hardening” of your Kubernetes system and employ security best practices to protect yourself against misuse and abuse.

Employ a “Secure by Default” philosophy that ensures that “security best practices and critical security controls” are implemented right from the birth of the Kubernetes cluster.

Implementing system hardening the manual way is painful, expensive, error prone and leaves a massive hole from a security and governance PoV. Consider using a best of breed platform such as “Rafay” to automate and streamline this task.